Amazon US | Amazon UK | Read for free on Kindle Unlimited

Welcome to Havenwood Falls, a small town in the majestic mountains of Colorado. A town where legacies began centuries ago, bloodlines run deep, and dark secrets abound. A town where nobody is what you think, where truths pose as lies, and where myths blend with reality. A place where everyone has a story. Including the high schoolers. This is only but one… 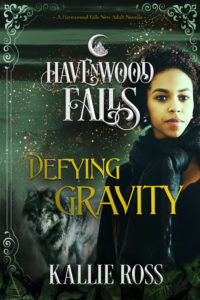 Welcome to the secluded mountain town of Havenwood Falls, home to sexy men, strong women, and neighbors who bite. Discover supernatural mystery, thrills, and romance in a place where everyone has a deep, dark, and often deadly secret.

The weight of tradition grows heavier on Tate Kasun each day. As a wolf shifter, he knows the ancient magic of Havenwood Falls must be protected. As the son of the sheriff, he’s expected to safeguard that magic from outsiders. But then Alex Newton crashes into Tate’s world and makes him question who and what he should be protecting.

After years of trying to prove the supernatural world doesn’t exist, Alex Newton stumbles into Havenwood Falls, past their protective wards, and into the arms of Tate Kasun.  Alex discovers that the ancient ring she wears holds the power to give life, while making her immune to the magic around her—which not only makes her a threat to the Court of the Sun and the Moon, but puts her in imminent danger from those who want the power for themselves.

Alex is pulled into a world she can’t explain. Tate is drawn to Alex in a way he can’t deny. Will Tate defy his pack and put Havenwood Falls at risk to protect Alex? Or will he be able to convince the town to trust his instincts and pull together to protect this outsider? 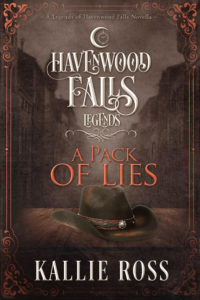 Every town has stories of its past, and Havenwood Falls is no different. And when the town’s residents include a variety of supernatural creatures, those historical tales often become Legends. This is but one . . .

Gaby Kasun, alpha of the Kasun Canyon Pack, is responsible for protecting her people and the magical falls hidden in the mountains in the Wild West. With the threat of war looming, hostile natives, and an emerging new world, she rules with desperate determination, while struggling to ensure her pack’s survival.

In the summer of 1820, as the pack prepares for winter, Gaby receives a message of hope from an old acquaintance—promising wealth and security in St. Louis. All she has to do is travel to the big city, collect what the pack needs, and return home before the first snow fall. With no other options available, she and her mate Ric hit the trail, determined to turn things around for their people, no matter the risk.

When Gaby and Ric arrive at the gussied up, gun-slinging city, they’re met with obstacles at every turn. The Creole Elite, a group of tycoons led by Benedicte Trudeau, have other plans for Gaby. The alpha is forced to fight for her life as she battles to save her people and her relationship with Ric.

Supernaturals hidden in plain sight. Concealed love. A life-ending shootout. Gaby must unravel a pack of lies to save herself and her pack. 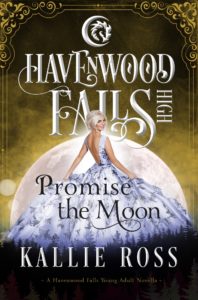